Not relaxed in Vietnam …highs and lows of a family trip 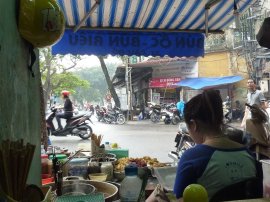 HOME to 90 million people and more than 20 million motorbikes, Vietnam is a lively, noisy country that packs extraordinary geographical features and a fascinating heritage into a long, skinny strip of land bordered by China, Laos, Cambodia and the South China Sea.

This rapidly modernising Asian dragon is a popular holiday destination – most people will tell you that it’s on their list of places to see, or that they’ve already been there and they loved it.

For our Armidale-born teenage sons and ten-year-old daughter, who’d previously gone no further afield than New Zealand, this holiday was their first experience of a very different way of life.

They took it all in their stride: the fragrant noodle soups sprinkled with fresh herbs; the women in conical hats carrying market produce swinging from bamboo poles; the scooters with improbable loads (from live pigs to double-bed mattresses); the dragon’s-teeth limestone mountains; the acres of rice paddies dotted with buffalos and electricity pylons – along with the pestering hawkers on the streets; the 24-hour gastro bug that struck during our overnight cruise; and the infernal honking chaos of the traffic.

Not wanting to cram too much into two weeks, we confined ourselves to northern and central Vietnam, visiting Hanoi, Halong Bay, Phong Nha-Ke Bang National Park, Hue, and Hoi An.

Most package tours would include all of these places bar one – and throw in steamy Saigon, the Mekong Delta, and an overnight train trip to the northern hill-tribes town of Sapa too – but the place they don’t include was, of course, the absolute highlight of our trip.

The karst mountains of the UNESCO world heritage-listed Phong Nha-Ke Bang National Park are cloaked in rainforest and riddled with a vast network of spectacular caves.

Many were used as hospitals, bomb shelters and ammunition depots during the American War, but some have only recently been mapped by explorers, including Hang Son Doong cave, currently thought to be the world’s largest, and the majestic, awe-inspiring Paradise Cave, which was discovered in 2005 and opened to the public in December last year.

We spent three nights at nearby Phong Nha Farmstay, a comfortable, friendly, backpacker-style place set amid rice paddies and rustic villages, run by an Australian and his Vietnamese wife.

It received rave reviews in the latest Lonely Planet guide, which the owners say has been a mixed blessing, because now travellers turn up expecting all the usual conveniences, despite the rural location.

We did their full-day tour of the national park, including Paradise Cave, which was as beautiful as we’d been told, with wooden staircases cascading into cathedral-sized spaces full of sensitively-lit stalactite and stalagmite formations.

However, it was a raw, undeveloped wet cave that made the biggest impression on us, because exploring it felt like such an adventure.

You reach Dark Cave by kayaking along the turquoise Chay river to the entrance, and then you wade inside until the water becomes so deep that you have to swim. The only illumination is your head torch (which you have to keep dry) and the squelchiness underfoot when you are walking through the water is, the guide tells you, bat shit.

I don’t think my teenagers will ever forget clambering onto a “beach” hundreds of metres inside the pitch-black cave and shining their torches on the ground to find a scorpion as well as a spider sharing it with them.

With hindsight, I wish I’d included more of rural Vietnam in our itinerary, and spent less time in cities. I did love the bustle of Hanoi’s old quarter, and the beautiful riverside port of Hoi An,

but could happily have skipped the imperial city of Hue.

Hue’s main tourist areas feature particularly wide, busy streets, and as pedestrian crossings don’t exist in Vietnam, getting across involves walking slowly and steadily into the non-stop cavalcade of motorbikes, scooters, cars, minivans and cyclists, trusting the drivers will weave their way around you.

I was okay with this strategy if only a few lanes of traffic were coming at me from each direction, but I did tend to freeze like a rabbit caught in headlights when there were more.

Usually my family forged ahead while I dithered, leaving me stranded on one side of a busy street while they waved impatiently from the other side.

On one occasion, a pair of cyclo drivers took pity on me and appointed themselves as my escorts: one walked in front, flapping his arms at the 12 lanes worth of vehicles, while the other grasped me firmly by my elbow and hauled me across.

My kids thought it was hilarious.

And although in my twenties I spent a year in South America, skidding around mountain bends on “chicken buses” packed to the rooftop with people and animals, I enjoyed being a passenger on the roads of Vietnam even less than I liked being a pedestrian.

During the three-hour trip from Hanoi to Halong Bay, I made the mistake of picking a seat in the minivan that had a good view of the oncoming traffic. Our kamikaze driver punctuated every overtaking manoeuvre, and every near miss, with a blast on his horn. On the return journey, I sat further back, plugged my ears with my iPod, shut my eyes, and slept. That was much, much better.

My assessment of Vietnam, overall?

It’s exotic, it’s cheap, and the food is fantastic – but it’s not what you’d call relaxing.